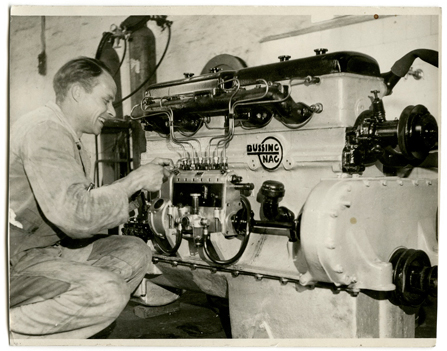 The company started as an importer of spare parts from a manufacturer in Italy. In addition to nozzles, delivery valves and plungers and barrels, Fera, which was Siegfried Jensen’s first major supplier, produced almost all standard parts for the fuel pumps of the time. As Siegfried Jensen had trained as a mechanic at the  Burmeister & Wain shipyard in Copenhagen, it was relatively easy for him to set up his company, build up a good stock and establish his name as a specialist in the field of fuel injection.

Already in 1964, Siegfried Jensen was forced to take a drastic decision and change his supplier of vital products, such as nozzles, delivery valves and plungers and barrels, to DUAP AG in Switzerland as Fera had gone into receivership. At the commencement of the contract with Willy Wojacek of DUAP, Jensendiesel ApS became the first DUAP agent with a proper contract. DUAP became the linchpin in Jensendiesel’s supplier portfolio as DUAP’s products were used by various named engine manufacturers. Among these were Allis Chalmers in the United States which at the time was a major supplier of construction equipment and had a large market share in Denmark. Jensendiesel ApS became the main supplier of fuel injection nozzles for all Allis Chalmers centres in Denmark. 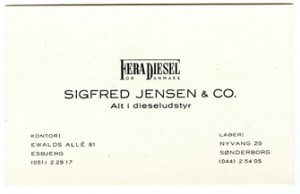 At that time, Siegfried Jensen travelled on business in Denmark by train to make his sales visits. He carried the spare parts with him in a suitcase. The train was probably a cheaper means of transport when money was tight at the start-up of the company, and the hours spent in the train probably also gave Siegfried Jensen time to reflect.

In 1964, the company moved to Esbjerg when Siegfried Jensen’s brother joined the company. This brother, however, sadly died in the 1960s after which Siegfried Jensen continued on his own. Various employees worked for the company in the period from the mid-1960s until 1981. The accounts were handled by a part-time employee. 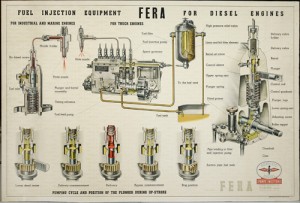 The company premises at the time were two rooms in a house on Carit Etlars Alle in Esbjerg –  a small office at one end of the house and a stockroom in the utility room at the other. To get from the office to the stockroom, you had to go outside as the door between the kitchen and utility room was blocked by shelves full of stock. Siegfried Jensen was an agile man so this was no problem for him. 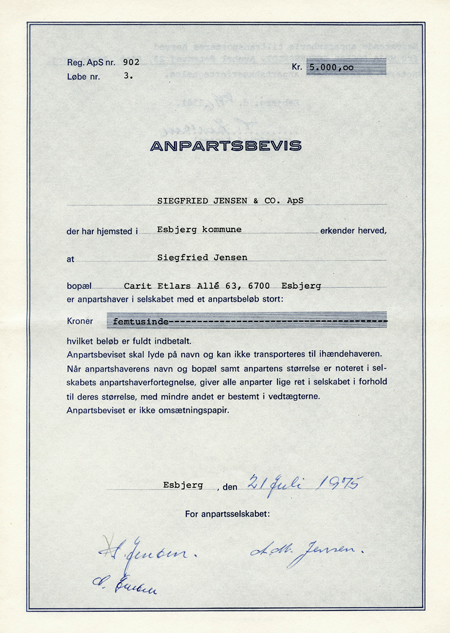 In 1980, Siegfried Jensen suffered a brain haemorrhage and was admitted to hospital. After treatment, he returned home again, but had to continue life in a wheelchair. Mrs Jensen continued to serve customers from the small stockroom, but as she did not re-order supplies, stocks soon became so small that they were unable to maintain a satisfactory service for the company’s customers. They chose to sell the company to their daughter and son-in-law Maja and Henry Schneefeldt who had lost their life’s savings to the bank in the construction crisis at the beginning of the 1980s. During the summer of 1981, they took over Jensendiesel ApS and collected all the spare parts, shelves, accounts etc. and took them to Avnbøløstenvej in Avnbøl which became the company premises before the company moved to Sønderborg in 1996. The shelves were transported in an open lorry and all the spare parts in their respective stock drawers were transported in a VW Bus.

As Henry Schneefeldt had managed a haulier business, cement factory and gravel plant, he knew about mechanics. He was self-taught and quickly learnt all the basic rules of fuel injection and how to stock these spare parts – with the help of the problems faced by the customers. The whole company could be fitted into a shed from the gravel pit that Henry Schneefeldt had run in Kruså.

The big best seller at the beginning of the 1980s was the F117 overflow valve. The F number originated with the Fera brand from the early 1960s and 117 was its serial number. This overflow valve was used on many Bosch P-pumps, primarily for Volvo and Scania lorries. The delivery valve is one of Jensendiesel’s biggest best sellers to date.

Henry Schneefeldt took Jensendiesel ApS to the next level in the Danish market and expanded the businesses with excellent suppliers abroad and countless customers in Denmark. The company continued to import and distribute fuel injection spare parts in Denmark.

In the mid-1980s, the company moved out of its shed and into an extension to the main building at Avnbøløstenvej in Avnbøl. The office and stockroom floor areas were doubled and a computer was purchased. The company’s first computer was a Hewlett Packard with a touch screen. At the time, the HP computer cost DKK 135,000. The computer eased the company’s workflows in terms of invoicing and customer account statements.

By the end of 1989, Henry was suffering from cancer and his son Finn took over the day-to-day running of the business.

On 26 November 1991, Finn Schneefeldt took over Jensendiesel ApS and thereby became the third generation of the same family to manage the company.

In 1995, Jensendiesel ApS got its first IT network with its own server and two workstations. This large investment took the company to the next level and make workflows more efficient with stock control, financial systems and an invoicing solution from Navigator. The latter was a high-quality Danish product which later became Navision when Navigator merged with its largest competitor Damgård Data – and was subsequently sold to Microsoft. Jensendiesel ApS currently uses Navision 5.0 Dynamics.

Two years after the acquisition of the IT network, company premises had to be expanded again. Jensendiesel ApS moved back to Sønderborg to the address at Agtoftsvej 3d. This address provided more space for both stockroom and office facilities. With the help of friends and relatives, the warehouse and office were renovated and the space changed to make it more usable – canteen and offices were merged into one large space.

In 2014, Jensendiesel ApS had a stand at the Automechanika trade fair in Frankfurt where the company also presented its new logo. We have since regularly participated in trade fairs in Frankfurt, Dubai and Amsterdam.

In 2018, the company bought its own buildings in Tørsbøl by Gråsten and today has a total of 3,400 square metres available. All goods are delivered, recorded and stocked here. No goods are sent directly from supplier to customer. Quality is a priority and the company management is only prepared to supply goods of the same quality as the ones sold by OEM manufacturers.

This website uses Google Analytics to collect anonymous information such as the number of visitors to the site, and the most popular pages.